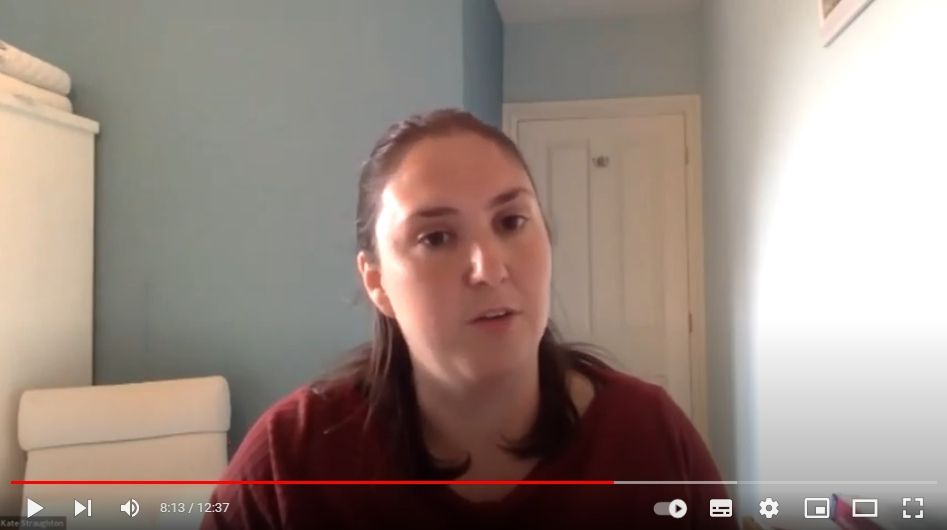 “Thank you very much for inviting me to the conference. I’m a Physician Associate and have been qualified for several years now, working in a few different settings and in education itself for around seven years. I have also worked in a university that did not use role players, simulated patients or ACEs and instead relied on volunteers. Now, I find myself working on a different programme where we rely heavily on ACEs, simulated patients and role players. So, I just want to talk a little bit about my experiences from having been a student but also from working on the other side of the fence as an educator.

“A word that has come up on the conference today is consistency, which I have found personally when working with ACEs. When you have a scenario to work with, you know that that’s what the ACE is going to deliver. As an educator, you can then concentrate and talk to the student about the learning outcome. You don’t have to worry about whether the ACE is delivering the scenario in the correct way, consistently and accurately. That’s the beauty of having such highly trained people with that type of experience over several years; and who also have the ability to improvise when needed quickly, yet still work within the parameter you have set as a teacher. This means we can go down different routes depending on how the student interacts with the ACE.

“For me, the really useful thing is whilst teaching the students we are able to stop the scenario and if necessary, rewind and play it again. We give students time to reflect on the experience, they can then have a chat with their colleagues, re-calibrate and try it again to see how the response changes.

“It’s about identifying errors and being able to iron those out. I’ll give an example: I recently taught a Breaking Bad News session and here we had a scenario which we had used several times before. We knew that it worked very well: ‘One student said what if we adapt the scenario so the ACE and the scenario is one where the patient wasn’t expecting any bad news, so it was a complete surprise for her.’ The ACE we were working with was highly experienced and  so I had a very quick chat with her and then she came back in and ran it in a completely different style. The student was then able to compare and re-calibrate some of the earlier statements they had made. A stupid statement made previously was changed and the learning outcome was remarkable.

“The students really appreciated being able to see those changes and,  as we went through another example, their style of communication was demonstrably better. The other real strength, and what makes the ACE unique, is their ability to give feedback on examination technique.

“We’ve had students, fairly new first-year students, who had gone out on their first hospital placements. They returned to university and said that they were nervous about examining real patients. This is quite a common experience. So we explored why and the comment came back that they were afraid to examine patients in pain. They felt that although they had a good grasp of the examination routine, they were worried that they might hurt a patient. As a result they were stepping back and weren’t getting too involved with real patients. They didn’t want to cause any discomfort and consequently they were nervous.

“We were therefore able to incorporate that into our teaching and the ACE and I ran a session about examining a patient in severe pain. We had the student perform a GI examination on the ACE who presented with severe abdominal pain. What we found was that aside from being nervous they just weren’t palpating deeply enough because they were really worried about hurting the patient,  and that’s obviously knowing that this is a simulated patient!  Once two or three students had received the feedback from the ACE that they needed to palpate appropriately with good communication skills, they were able to allay any fears they had. Incidentally one student was was too forceful and would have hurt a real patient. We then had the ACE turn the pain on and off until the students got the message. You can’t do this with a volunteer or a real patient!

“Having the ability to turn the symptoms on and off is really useful and all the students walked away saying that was one of the best sessions they had had. They felt much more competent and confident in their abilities.

“The other thing I think that I wanted to raise at this conference is that what I like to do when I’m working with ACEs is to let them get on with it without me interfering. I’m still involved, but at a distance, so there is no undue pressure on the student from the academic. I’m there if they need to talk to me. They tend to share their worries with the ACEs more openly too, which is extremely useful. To be honest, the ACEs know the answers to a lot of the questions, especially when it comes to their experiences of being involved in OSCEs. The student tend talk to the academic about their academic performances, whereas they will admit things to the ACE about their lack of confidence or worries.

“I’m really confident and I do feel this quite strongly, that the little bit of time away from the academics really helps. With an experienced ACE, we know that the student is in safe hands.  They are able to get more out of their experiences, which ultimately will help them in the long term too.

“I think simulation using mannequins also plays an important role. The more I talk to my fellow professionals about simulation in my role as FPA president, the more we discuss how you have to get the mix of skills just right. ACEs are not the answer to everything to be honest and the right answer is probably going to be that we should think in terms of a hybrid approach to simulation in teaching.

“However, the training that goes into producing ACEs and the confidence they engender in the student definitely improves the students skill sets quickly and effectively. They bring the human side to simulation and also provide standardisation. I’m just finally, quickly going to touch on that topic now as I feel this is important.

“With an ACE, you will get an expert patient who can repeat again and again a task, whether that be roleplay or physical examinations or a mixture of the two. In the past, I have used volunteer patients and the main problem was their lack of consistency and their inability to react in the same way every time, which is very important in an OSCE or training for the OSCEs. They would also get tired and sometimes give the student too much information too readily or even forget important details. In some cases, they would also add details that were not relevant. This can take a student off course quite dramatically.

“We’ve seen OSCEs where we’ve had students having wildly different experiences over the course of a day, and if it’s for something like an assessment, particularly high-stakes assessments, you need to be able to rely on consistency and standardisation. This sort of improvised information can be included of course, but needs to be done in a way that maintains consistency across the day.

“We have ACEs and role players who can improvise within a fixed scenario without losing track of what the key points are and what the desired outcome is. They will also make sure that this  done within a specified timeframe. For me the important point is that I’ve had extensive experience from both sides, both as a student where I was really nervous and didn’t have any clinical background, then as a Practice Manager before I trained as a Physician Associate.

“When I was a student Physician Associate, having an ACE there was so reassuring. My colleagues, some of whom who are on this conference, who were responsible for training me were also incredibly intimidating. They knew so much about medicine and had so much experience, and actually just having someone who you could just have a chat to such as the ACE, was invaluable to me. It made real life much less scary! I also felt much more prepared to be able go into a hospital and have a chat with a real person because of my experiences with the ACEs. It also meant that I got stuck into the course as a PA student and it prepared me to be able to take an accurate history, to examine a real human being, and to be more practical rather than just observing clinicians on placement. That experience to me was the key to my success as a PA and educator.”