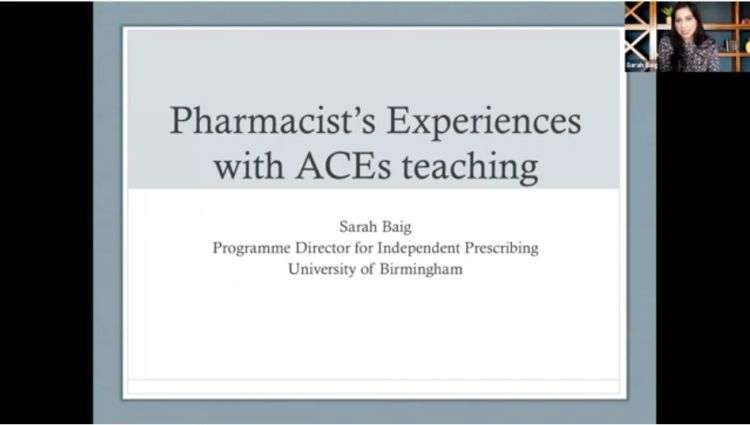 Programme director, Independent Prescribing Course – NHS Lead PCN Pharmacist Sarah Baig is involved in teaching on the Independent Prescribing Course, a multi-disciplinary course working with Health Professionals from a whole range of disciplines. On our recent Associate Clinical Educators online conference she discussed her first experience of working with ACEs. Prior to that she had only worked with medical role players and simulated patients. She found that the experience of working with ACEs far exceeded her expectations. Here, is what she had to say: 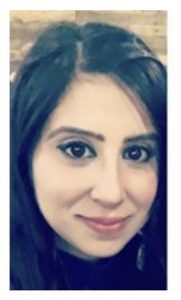 “Today, I’m going to talk about the pharmacists’ experience of working with ACEs, teaching on a multi-professional course. Involved were nurses, pharmacists, physiotherapists, paramedics, optometrists who were studying on the Independent Prescribing Course at the University of Birmingham Medical School.

“The course itself was attended by a whole range of Clinicians. We very often have nurses who are very experienced in clinical examinations, as well as physios are great at MSK examinations. Then we have pharmacists who have never done physical examinations before, and so there is a big variation in the level of knowledge the students have.

“One thing that really helped was having ACEs assist us to integrate the different skill sets. The ACEs helped utilise the experience of other students to support the weaker ones. We had lots of positive feedback about how intensive the ACEs understanding of clinical skills was. Feedback on the teaching was also very positive and having that level of skill from the ACEs was vital.

“I was really impressed by the ACEs, especially their consistency in the teaching process, and also surprised at there versatility. The ACEs (it turns out) are multi skilled and able to teach lots of different systems examinations, which in itself really helpful. I really liked the way they built rapport with the students and the teaching staff. Their other contribution was the ability to put the students at ease, which helps in the learning process. The ACEs are not clinicians and therefore the students don’t feel that they are being judged in any way, which of course opens them up to learning the techniques that much quicker.

“I think what is also important to mention, is that the ACEs know their limitations and I really liked that. They will never try and overstep the mark, so when they found that they didn’t know a clinical reason for certain parts of the examination they would enlist the clinician at hand to take over. I think it’s really important as a professional to demonstrate that mutual trust, and that the ACEs are working as part of the team. The students really valued the feedback that the ACEs were able to give about techniques like palpation and percussion, for example.

“I wasn’t in such high demand from students on the days I worked with the ACEs. At one session we had three ACEs assisting us teach and the ratio was 26 students to 3 aces. We also noticed there was a big difference between the way the role players and the ACEs were working, and that’s what really cemented my passion for working with ACEs. The ACEs, it turns out are also Roleplayers, and can therefore provide feedback on the students communication skills as well as their practical skills.

“The ACEs were used also for the OSCEs which was really helpful. We had some very honest and appropriate feedback from the ACEs which was included in our global assessment tool. The feedback from the students and the clinicians attending has been absolutely amazing, and they’ve actually said that they’d like to have ACEs in other aspects of their core system of training. All of our students are advanced clinical practitioners and they asked if it was possible to have ACEs on the ACP course. For me that was really positive. It says a lot about the way the ACEs work. I think there’s lots of scope for development of clinical skills within the ACP and the utilisation of ACEs. I for one will be working with the ACEs whenever I can.”

If you are a Clinical Educator like Sarah and would like to take advantage of using ACEs as part of your clinical teaching, book now for a free consultation. Contact us via the form below or even give us a call on 07870611850. Thanks again for reading this post. Please also leave a comment and share.